"Prologue to the Legend"

Karla (カーラ, Kāra) is one of the main antagonists in Record of Lodoss War and one of the primary antagonists of main character Parn. Karla was originally a sorcerer from Kastuul, but was slain by a barbarian in the Fall of Kastuul. She managed to survive by sealing her soul and powers in a circlet and can take possession of whoever wears it. Karla has "lived" for centuries by taking possession of others.

Karla believes Kastuul was destroyed because it had become too powerful. She tries to protect Lodoss from suffering a similar fate by maintaining a balance between the forces on the island. Whenever a force threatens to become too strong Karla will interfere and adjust fate a little. Because of her desire to maintain balance she is neither called white witch nor black witch, but the Grey Witch.

Early life and Fall of Kastuul[]

Karla was born into the ruling family of the Ancient Kingdom of Kastuul. She was a powerful sorceress, like the rest of her family, and grew up in the lap of luxury. When Kastuul fell, she and the Governor Saluvan were the last left. Saluvan told her about how he had cursed the five chromatic dragons (Shooting Star, Abram, Mycen, Bramd, and Narse) with the most powerful relics of Kastuul (Scepter of Domination, Soul Crystal Ball, Staff of Life, Mirror of Truth, and Crown of Knowledge) to preserve their legacy, but Karla was beginning to see the error of their ways. Karla had ensured her own future by sealing her soul and powers into her circlet, and she would possess whoever wore it. She believed that a power like Kastuul should never rise again, because it was doomed to fall. Karla then went into battle and was killed, but she possessed the barbarian who killed her and lived her life passing from person to person, stirring wars and conflicts to make sure that no single power in Lodoss gained total control of the island.

Since the Fall of Kastuul, Karla devoted herself to keeping the balances of Lodoss. She believed that if one power gains too much strength in Lodoss, another downfall will occur like that of Kastuul. Karla sees her role as protecting Lodoss, though the cycles of war she has created may cause more damage than good. After centuries of doing this, she comes close to believing herself to be a god.

War of the Demon King[]

When the Demon King was released, Karla saw this as a threat to her carefully maintained balance of power. If the Demon King had its way, the entirety of Lodoss would be destroyed. Thus, she began crafting a plot to bring the demon down. First, she rescued dwarven King Flaibe from death as he battled the arch devil who took his throne, then arranged for Neese, the renowned young Marfa priestess to heal him. Karla presented herself in full armor to all she met, hiding her identity and giving no name to those who asked. She would remain an enigma to Lodoss. The Grey Witch became one of the Six Heroes who defeated the Demon King, along with Fahn, Beld, Flaibe, Neese, and Wort. Though she maintained secrecy from most of her comrades, Wort discovered her identity, and kept her secret for many years. Karla disappeared for the next thirty years.

Seven years before the War of Heroes, Karla had kidnapped Neese’s daughter Leylia. Leylia had been born into the reincarnated spirit of Naneel who was the high priestess of Kardis. If anyone wanted to resurrect Kardis, they could do so by using Leylia’s body as a doorway. Karla realized this and sought out Leylia. By possessing her, she protected her from Naneel’s curse.

Thirty years after she had fought against the Demon King, Fahn had ascended the throne of Valis, and Beld had tamed Marmo. Beld’s ambitions grew to wanting to conquer all of Lodoss while Fahn attempted to unite Lodoss through diplomacy and peaceful relations. Karla realized both powers were becoming too great and she helped influence Beld and Fahn into going to war with each other. Beld killed Fahn in their duel, and then Kashue of Flaim challenged Beld. Karla knew even Kashue was no match for Beld, so she had an arrow fired, which hit Beld’s arm and distracted him so Kashue could go in for the kill.

However, throughout the war, the dwarf Ghim, who had been close to Leylia, learned the truth of what happened to the priestess and went after Karla to free Leylia. Parn and his group soon joined Ghim and they fought Karla, but Ghim was killed as he knocked the circlet of Leylia’s head. After the fight, Karla took control of Woodchuck, one of Parn’s party.

Karla disappeared for fifteen more years. She was by Neese’s bedside with the souls of the other six heroes when she died. At that time, she still had Woodchuck’s body.

It can only be assumed that she disposed of Woodchuck’s body not long after Neese’s death and took another female body, as Woodchuck had likely grown too old to be of service to her. When Wagnard began his resurrection of Kardis, he gained the necessary relics—the Soul Crystal Ball and the Staff of Life—and the sacrifice intended as the doorway, Little Neese.

War of the Destroyer’s Resurrection[]

Karla felt the side of “good” was gaining too much control, but the threat offered by Kardis’ resurrection was equally unappealing. When Parn and Spark’s parties came to Marmo to save Little Neese, Karla saw them as the most powerful in Lodoss. She offered them the choice of sacrificing themselves to stop Kardis’ resurrection or she would aid in resurrecting the Goddess herself. Spark refused her offer and she went to aid Wagnard. While Spark and his group went to save Little Neese, Parn and his companions went to find Karla. Spark killed Wagnard, and they thought they had saved Little Neese, but Karla picked up the incantation and finished the ritual. Parn stopped Karla by knocking the circlet off her head.

After her circlet was removed from her last victim, Leylia decided to keep it. She reasoned that so long as she was conscious of Karla when she wore the circlet, she would be able to avoid possession. Karla’s circlet is now in possession of Leylia, who will occasionally turn to Karla to try and learn from her vast knowledge. 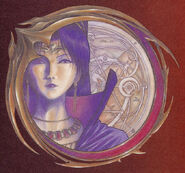