"The Scepter of Domination... The Dream of a United Lodoss"

Orson (オルソン, Oruson) was born a country boy, but became a berserker when he witnessed goblins destroy his home village, most notably killing his sister in the process. The red jewel on his sword and brooch distinguish Orson as a man possessed by Hyuri, a spirit of war and rage.

He later meets Shiris and travels Lodoss together with her as mercenaries. They eventually encounter Parn’s group and join them for a while.

In the 1990 OVA Orson has brown hair, tanned skin and maroon eyes. He wears olive green armour and a green cape. He wears a multicolour bandanna around his head.

In the 1998 TV series he looks mostly the same, with some colour differences; his hair is a bit darker, his armour is grey instead of olive green and his cape is brown. His eyes are emerald green. His iris and pupils are no longer visible when possessed by Hyuri.

Orson grew up a simple country boy with a future of tending sheep and crops. However, his simple life was shattered on a night when goblins attacked his home village. Cornered in a barn, Orson and his sister tried to defend themselves, but were outnumbered and out-skilled. To save her little brother, his sister jumped out into the open with only a knife to defend herself and gave her life for Orson to escape. Orson hid and watched her die in front of his eyes. In his sorrow and shock, Orson was filled with rage and bloodlust, leading Hyuri to possess him. He transformed into a berserker and somehow killed every goblin in the barn.

Now orphaned and afraid of himself, Orson set out into the world as a mercenary. A few years down the road, he met Shiris, a young noblewoman of Kanon, deposed by the Marmo. She became a mercenary like him and they traveled Lodoss together.

Orson and Shiris ran into Parn, Deedlit, and Cecil outside Zaxon. After Shiris challenged Parn, Orson saw her knocked to the ground and went into a berserker rage. Parn and Deedlit helped Shiris subdue him, but Parn's defeat of Shiris had left an impression on her, and she wanted to challenge Parn again.

The two mercenaries met up with Parn, Deedlit, and Slayn again. Orson was put in charge of leading a party to Fire Dragon Mountain. Shy and unassertive, Orson was at first unsure of commanding his party but quickly fell into the role of leader. At the same time, he wanted to learn how to control Hyuri so that he wouldn't hurt Shiris again, and also wanted to feel emotions like he had before. He was able to regain his emotions successfully, however, he was suddenly privy to a wide range of emotion with no conception of how to control it due to not having felt emotions in years, leading to crying upon regaining his emotions and suddenly being very open and honest with Shiris when he hadn't before, even telling her he loved her.

Orson was killed in the battle at Fire Dragon Mountain. He had finally gained control of Hyuri and couldn’t feel the presence of the spirit of rage any longer, yet when he saw Shiris in trouble and himself unable to reach her, he allowed Hyuri to take control once more. In his rage, he was injured severely, but it made no difference until Hyuri left him. Orson had given his life for the woman he declared his love for.

In the 1990 OVA anime, Orson and Shiris first meet Parn, Deedlit, Etoh, and Woodchuck while they are on their way to Karla's castle. The duo mistakes Deedlit for a dark elf and attacks under the misconception that Parn's group are Marmo. Like in the novels, Parn bests Shiris, which leads Orson to go into a berserker rage and attempt to kill Parn. Shiris calms him down by telling him there is no danger, and Parn and his group continue on their way.

Orson and Shiris then return to the capital of Valis, where they watch suspicious figures in cloaks walk through the city. They soon figure out that these people have captured Deedlit and assist Parn in rescuing her. Pirotess and her dark elf lackeys are scared off from attacking any further when they notice the red jewels on Orson's sword and cape denoting him as a berserker. Following the successful rescue, Orson and Shiris accompany Parn and Deedlit to Fire Dragon Mountain, where they meet up with King Kashue. Orson, Parn, and Kashue use the three lances of Myrii to kill Shooting Star.

Back in the capital, Shiris observes Parn giving Deedlit a rose and attempting to thank her. Jealous, she goes and sits outside next to Orson, who asks if she was with Parn, and she only snaps that he should know when to talk about something different. They then talk to King Kashue about the advancing war and Wagnard's plans for Deedlit. Kashue gives Parn and Deedlit a message to take to Moss. Deedlit is captured by Wagnard and Parn wakes up injured. He saddles his horse to go after her, and Shiris and Orson offer to take the message to Moss in his stead so he can go save Deedlit.

Shiris and Orson fight alongside King Kashue in the final battle on the island of Marmo. In the ending scene, they are seen standing next to Slayn, Leylia, and Etoh on the ramparts of the castle in Valis, watching Parn leave.

Unlike in the novels, Orson survives in the 1990 OVA. 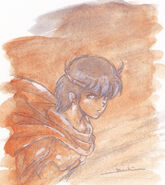 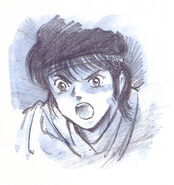 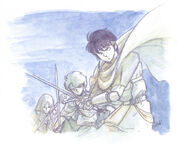